Pound to Euro Week Ahead Forecast: MPC Votes No Confidence in BoE Forecasts 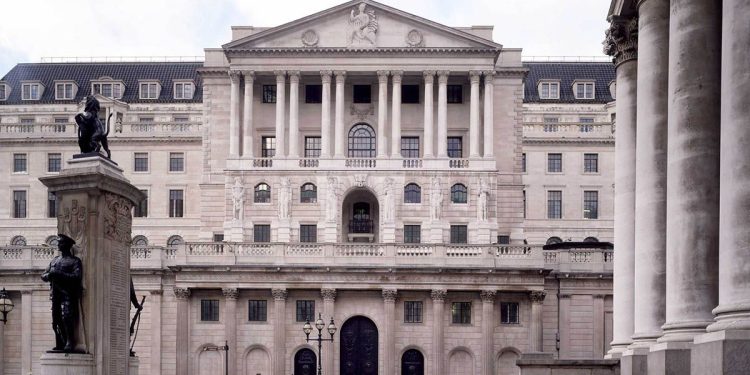 BoE Forecasts: The Pound to Euro exchange rate recovery has stalled and the risk of a partial reversal is high due to a disagreement between the Bank of England and market that is widely expected to lead the BoE into another de facto vote of no confidence in its own ability to predict UK inflation this Thursday.

Monetary Policy Committee (MPC) members are in a bind because of the large gap between market expectations for interest rates in the UK and the BoE’s own views on what will and won’t be necessary for inflation to eventually return to its 2% target, a gap that poses ongoing risk to Sterling.

“With fiscal policy tightening sharply next year, most MPC members will be content to revert to a 50bp hike. Nonetheless, the minutes of December’s meeting should be newsworthy for markets,” writes Samuel Tombs, chief UK economist at Pantheon Macroeconomics, in a Monday research briefing.

“We think the minutes could contain overt guidance again to markets that Bank Rate will not need to rise all the way to 4.5%,” he adds.

The trouble for the Pound is that market expectations are for Bank Rate to rise from 3% to around 4.5% by May next year while the BoE has indicated with its own analysis and forecasts that such ‘monetary tightening’ would inflict significant unnecessary damage on the economy in subsequent years.

This is why the BoE has attempted to steer market expectations lower and is also why any further increase in Bank Rate on Thursday would amount to either another vote of no confidence by the bank in its own ability to predict inflation, or otherwise a choice to depart from the mandate awarded by HM Treasury.

“The inflation target of 2 percent is symmetric and applies at all times. This reflects the primacy of price stability and the forward-looking inflation target in the UK monetary policy framework,” the latest iteration of the mandate says.

New forecasts projected in November that inflation would fall to zero by the end of 2025 if Bank Rate is raised to the 4.7% peak that markets were pricing-in at the time, amounting to a substantial undershoot of the 2% target the BoE is tasked with delivering by the end of any two-to-three year forecast horizon.

Similar has been true of the eight earlier increases in Bank Rate announced since last December with each set of forecasts suggesting that by delivering upon frequently increasing market expectations, the BoE would eventually undershoot its inflation target by incrementally larger amounts each time.

“Both the UK and the Eurozone have suffered an energy crisis which can be expected to continue to have a significant input into the pace of inflation and growth,” says Jane Foley, head of FX strategy at Rabobank.

If the BoE remains true to its recent form this week then the risk would be of a Thursday policy decision to raise Bank Rate to 3.5% and some accompanying commentary that casts fresh doubt over the merits of market expectations, all of which would do little to help Sterling.

BoE Forecasts: “We continue to see Bank Rate pushing as high as 4.5% by May-23 (Feb-23: 50bps, Mar-23: 25bps, May: 25bps). Why the need for 100bps more tightening in 2023? Persistently higher inflation on the way down, and upside risks to wage pressures,” says Sanjay Raja, a senior economist at Deutsche Bank.

“Risks to our call remain tilted to the downside, however. Given the dovish messaging from the MPC since November, risks are skewed to Bank Rate peaking closer to 4% than 5%, in spite of our inflation (and labour market) concerns,” Raja adds in a Friday research briefing.

However, the Pound to Euro rate is also likely to be responsive this week to the latest European Central Bank (ECB) interest rate decision due out soon after the BoE’s announcement and just like with Sterling the ECB’s interest rate decisions have done little good for the Euro during recent months.

There is as a result a risk that Thursday’s ECB decision will have an offsetting impact that limits any fresh or further losses for GBP/EUR this week.

Thursday’s central bank decisions are the highlights of the week ahead but in the meantime the Pound is also likely to be responsive to this Monday’s GDP data for October, the latest employment figures out on Tuesday and November’s inflation number on Wednesday.