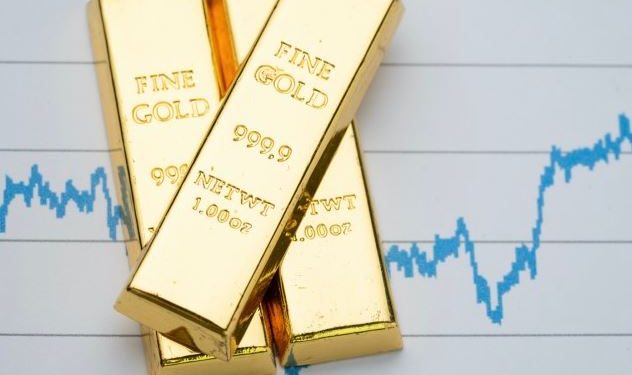 Gold price, Analysts are predicting the gold price will move well-above A$2,000/oz. As the Australian dollar continues to fall and with further declines expected, gold is attracting the attention of investors as it climbs to all-time highs and is predicted to continue soaring well beyond A$2,000 per ounce.

However, analysts envisage the precious metal’s upward journey will continue to move above A$2,000/oz (US$1,370/oz), with Martin Place Securities executive chairman Barry Dawes telling Small Caps he believes the gold price could reach A$10,000/oz in the next decade.

Since December last year the gold price has shot up more than 18% from A$1,657/oz to its current high.

Spurring the metal’s rise are increased buying from Asia and central banks, weakening global economic fundamentals and political uncertainty both within Australia and globally.

Speaking with Small Caps, Mr Dawes said the current rise indicated the next leg of the “great bull market” is about to unfold for the commodity.

Mr Dawes pointed to gold’s previous great bull market when it started from a low of around US$250/oz in 1999 and continued rising to reach a high of US$1,923 in 2011, before falling off.

“This time, the Australian dollar has been weaker,” Mr Dawes said.

He added he anticipated the gold price will hit the A$2,000/oz resistance level possibly next week, but definitely at some stage during the September quarter.

“Gold is seasonally weak in May-July and tends to start to move higher in August. Gold is unseasonably strong now so it could do anything from here.”

According to the Australian Bureau of Statistics, Australia’s latest growth figures are at GFC levels, with the economy expanding only 1.8% in the year to March.

Additionally, when looking at the growth in per capita terms, it has actually been negative the last three quarters.

Over in the US, Federal Reserve chairman Jerome Powell has also indicated he may reduce the US official interest rate in the midst of the country’s ongoing trade war with China.

The International Monetary Fund has downgraded its global GDP growth forecasts to 3.5% for 2019 – blaming the trade war and an economic slowdown in China.

UK and Eurozone economies are also expected to slow due to ongoing Brexit uncertainty and fiscal policy issues in Italy.

Frequently seen as the “safe haven” metal in times of slow economic growth and geopolitical uncertainty, the current global economic and political events are swaying investors towards gold.

Mr Dawes said although the current geopolitical issues themselves may not trigger gold to rise strongly, they may spark the short covering that is taking place.

Adding to the situation is increased buying from central banks and in Asia, which is depleting reserves and offering support to gold’s rising price.

Meanwhile, Mr Dawes said India and China have been buying up gold with additional demand arising out of the US, South East Asian and Middle East, North Africa regions.

“The demand from Asia exceeds Western gold mine production so there has been a rundown in inventory from `free’ gold in in the West,” Mr Dawes explained.

“Physical gold is now at a premium to the paper gold market reflecting this rundown.”

“I see the markets as being very tight now with significant short positions established in futures markets and on behalf of some bullion banks and hedge funds,” he said.

Mr Dawes pointed out global debt is “very high” and substantial gold prices would be required for central banks to value their gold high enough to offset the issued debt.

In Australia, lower interest rates have pushed the Australian dollar down below US$0.69, which although troublesome for travellers and consumers purchasing imported goods, is actually good news for Australian exporters such as gold producers.

The ongoing weakness in the Australian dollar against the US currency has boosted Australia’s export earnings, which grew more than 4% during the March quarter from the December period.

Compared to the March quarter last year, export earnings were up 15.5%, with the Department of Industry, Innovation and Science’s latest Resources and Energy Quarterly revising mining and energy export earnings higher for the 2018-2019 financial year to $277.8 billion – more than a 20% increase on the 2017-2018 period.

Which ASX-listed stocks are benefitting?

There is no doubt Australian gold producers are benefitting from the current gold prices and low Australian/US dollar ratio with Newcrest Mining’s (ASX: NCM) share price up more than 56% over the last nine months.

Not to be left behind, Kirkland Lake Gold (ASX: KLA) has rocketed 108% during the same nine month time-line, while Silver Lake Resources (ASX: SLR) is up more than 115%.

In the small cap space, some explorers have been lucky enough to fare well on the back of the rising gold price, with Victorian-focused Stavely Minerals (ASX: SVY) adding 12.5%, and Navarre Minerals (ASX: NML) gaining 30%, and Catalyst Metals (ASX: CYL) lifting 17% over the same period.

“It is my view that gold in US dollars will rise substantially from here and over the next decade will exceed US$10,000/oz,” Mr Dawes predicted.

“The long-term potential is well in excess of US$10,000/oz if you look far enough out,” Mr Dawes added.