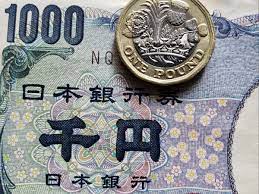 Short GBP/JPY Political Risk:: If you are pessimistic about the impact on the global economy of Covid-19 in general, and the possibility of new variants in particular, then going short GBP/JPY is a trade worth considering. On one side of the equation, the British Pound is a “risk-on” currency that falls when investors are downbeat about the outlook. On the other, the Japanese is a “safe haven” that strengthens when investors are fearing the worst.

Technically, the trade makes sense too from a strategic perspective. As the weekly chart below shows, GBP/JPY has been falling since July 2007 but is now close to the resistance line joining the lower highs recorded since then and could well, long-term, move towards the support line.

Short GBP/JPY Political Risk: Given there are many other risk-on currencies, why choose the Pound? Well, first the Bank of England still seems poor at communicating with the markets. The previous Governor, Mark Carney, was dubbed the unreliable boyfriend for that reason. The current Governor, Andrew Bailey, seems no better, and the markets are quick to punish the currencies of central bankers who miscommunicate their monetary policy intentions.

Second, political risk has increased in the UK as Prime Minister Boris Johnson has repeatedly stumbled, and has also angered the more libertarian wing of his ruling Conservative Party. There is no General Election scheduled in the UK until May 2024, and the Conservatives have a large Parliamentary majority, but a leadership challenge would still unsettle Sterling.

On the other side of the equation, it is perhaps misleading to call the Japanese Yen a haven currency, although it generally behaves as one. In reality, Japanese investors not attracted by the very low or even negative government bond yields at home tend to move their money into higher-yielding assets abroad when they are feeling optimistic. When they become more pessimistic they tend to repatriate their money to the relative safety of home. In that case there is demand for Yen to buy Japanese assets and the currency strengthens accordingly.

Concerns that the pandemic will continue to harm the global economy for longer than once seemed likely would therefore both damage the Pound and strengthen the Yen, especially as neither country’s central bank would increase interest rates under those conditions – taking away a possible prop for GBP if higher UK rates had still been expected. Of course, the economic recovery could persist, but the regular emergence of new variants such as the Delta and Omicron strains suggest that caution will be called for in 2022.

Looking to Sell EUR/GBP as the Retrace ...