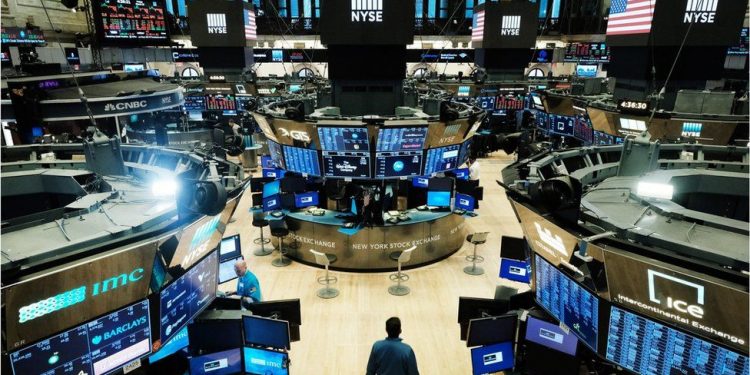 By Alun John HONG KONG (Reuters) – Asian shares tumbled on Friday while the U.S. dollar and Treasury yields rose in

Stocks slide: NEW YORK, May 6 (Reuters) – Long-dated U.S. Treasury yields surged and global stock markets slid further on Friday as investors worried the Federal Reserve may not be able to curb inflation in the years ahead even as U.S. data showed decelerating wage growth in April.

The data underscored challenges the Fed and other central banks face as they battle rising inflation with China’s lockdowns causing persistent supply chain disruptions and the war in Ukraine pressuring food prices.

The data underscored challenges the Fed and other central banks face as they battle rising inflation with China’s lockdowns causing persistent supply chain disruptions and the war in Ukraine pressuring food prices.

The inflation outlook past the next two years is beginning to look cloudier for bonds, at least for bond traders, said Jim Vogel, interest rate strategist at FTN Financial.

“We have taken into account, not necessarily the inability of the Fed to fight inflation, but an inflation problem that for right now is beyond central banks to calm for the rest of the decade. That’s pretty bleak,” Vogel said.

The Fed hopes to slow inflation by tightening monetary policy. Market volatility has increased on fears too much tightening could cause a recession.

Trade was volatile on Wall Street. The major indexes rose briefly into the green and the Nasdaq fell as much as 2.66%. The Nasdaq and S&P 500 posted their fifth straight week of declines, and the Dow its sixth. It was the longest losing streak for the S&P 500 since mid-2011 and for the Nasdaq since late 2012.

“The market is focused on the Fed being behind the curve and that’s why the market is down,” said Keith Lerner, chief market strategist and co-chief investment officer at Truist Advisory Services.

Fed funds futures priced in a roughly 75% chance of a 75 basis-point interest rate hike at next month’s Fed policy meeting – even after Fed Chair Jerome Powell said Wednesday the U.S. central bank was not considering such a move.

“Over the last few months we have seen the month-over-month pace of average hourly earnings starting to decelerate somewhat,” he said. “That’s a positive indicator that this surge in hourly wages that we experienced may finally be easing.”

The dollar slipped against a basket of currencies after two volatile days as investors focused on how aggressive the Fed will be in hiking rates.

The dollar index hit a 20-year high overnight on safe haven demand, the day after a sharp stock selloff driven by rising U.S. interest rates and as European currencies weakened on worries about growth in the region.

Gold rose on a weaker dollar but the prospect of aggressive rate hikes from the Fed led bullion to post its third straight weekly decline.