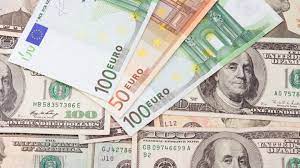 EUR/USD Volatility to Swell? The US Dollar may sharply rise in the week ahead as market-wide risk aversion grips investors amid the ongoing Russia-Ukraine war and hawkish comments from the Fed. The anti-risk Japanese Yen and Swiss Franc may also get a push higher, though the Greenback’s unparalleled liquidity may give it an edge over its counterparts.

Last week, markets tumbled following comments from the Fed implying a strong hawkish bias despite a slew of volatility-inducing influences. On Monday, the S&P 500 gapped lower, though it ended the day in the green. Risk aversion permeated across asset classes however, and saw the US Dollar, Swiss Franc, and Japanese Yen close higher against most G-10 currencies.

Commodity-linked currencies such as the Swedish Krona, Norwegian Krone, as well as the Australian and New Zealand Dollars were hit particularly hard. Investors may see this dynamic exacerbated in the week ahead, but what may be the biggest market movers?

The market reaction to French President Emmanuel Macron’s win was somewhat muted. The Euro and regional equity markets did not exhibit notable jubilance the day after the results were announced. Traders were likely pricing in a victory for the incumbent, and with that political risk out of the way, European stocks are now focused again on macroeconomic concerns (like the Fed).

Meanwhile in Ukraine, the strategic port city of Mariupol is now mostly under the control of Russian forces. The news is now focused the Azovstal metal works factory. Reports indicate the Kremlin may be starting a new assault focused on seizing the industrial complex from Ukrainian forces.

On Monday, US Defense Secretary Lloyd Austin said he hopes to see a “weakened Russia” following Moscow’s actions against its Slavic neighbor. While Washington has expressed no intent of sending its own troops or NATOs, policymakers have supplied weapons to Kyiv and pledged to continue that support, much to the chagrin of Moscow.

For more updates on geopolitical risks

Unsurprisingly, this has been a source of great consternation between Russia and the US, who were already on precarious terms prior to the invasion. However, the conflict has also widened the fissure between Washington and Beijing, an already-fragile relationship following trade wars initiated by the Trump administration.

US officials warned China that if it provides “material support” to Russia, sanctions could be imposed. During the Friends of Europe conference panel discussion, United States Deputy Secretary of State Wendy Sherman sent a sharp message to policymakers in Beijing:

“They have seen what we have done in terms of sanctions, export controls, designations, vis-a-vis Russia, so it should give them some idea of the menu from which we could choose if indeed China were to provide material support”.

Washington offered a friendlier message toNew Delhi, stressing that it would work with the government to remove India’s reliance on Russian weapon imports. Tensions between China and India over the disputed border along the so-called “Line of Actual Control” (LAC) in the Himalayan mountains have been a high priority for Indian President Narenda Modi.

Securing military equipment in a reliable relationship is crucial not only in Sino-Indian relations but also amid a worldwide surge in inflation amid disrupted supply chains. These ongoing negotiations illustrate how in the globalized world of the 21st century, it is very rare that actions in one corner of the world will not reverberate to the other, impacting policy as well as markets.

READ MORE: How to Trade the Impact of Politics on Global Financial Markets

US, EUROZONE CPI AND GDP DATA

Upcoming Eurozone CPI and GDP data could rattle the Euro and exacerbate its losses against the US Dollar if the outcomes convince traders that the ECB may have to reconsider its rate hike plans. Last week, the Euro plunged after central bank President Christine Lagarde said monetary authorities may need to cut the growth outlook as a result of the fallout from the Ukraine war.

Combined with the Fed’s hawkish comments, this saw EUR/USD plunge as money markets increased their bets of ultra-aggressive rate hikes in 2022. US GDP and personal income/spending data will be published this week, and may exacerbate the pair’s volatility if the figures reinforce the Fed’s hawkish outlook.

If US economic data surprises to the upside, the US Dollar may get a push from two narrative forces. The first is the assumption that strong economic data will reinforce and potentially even inflate an already-hawkish Fed outlook. The second is tied to the first: the prospect of tighter credit conditions may cause markets to panic and push investors into the arms of the Greenback.

EUR/USD is currently trading at 1.0697, the lowest level since March 2020, during one of history’s biggest selloffs in financial markets across asset classes. The pair’s decline started in January 2021, though a steeper bearish incline developed in May and saw the fall accelerate. On Monday, EUR/USD had the biggest one-day drop since March 31, 2022.

While there appears to be a directional bias, positive RSI divergence could indicate a reversal coming up. However, it should be noted that an observed phenomenon in one indicator is not a guaranteed prediction of a specific outcome. EUR/USD’s downtrend could accelerate despite the divergence shown in the Relative Strength Index.