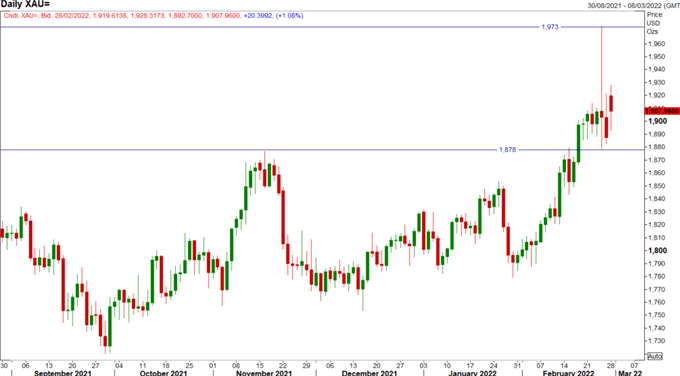 Gold Prices Lack Upside, Geopolitics remains the core focus for investors as financial markets digest the fallout from this weekend’s events, in which the US and the EU, alongside other; Western States removed selected Russian banks from SWIFT; while also freezing some of the Russian Central Bank’s assets.

In response to this announcement, commodity markets gapped higher with gold jumping over 2% to hit a high of $1928, meanwhile, Brent crude futures rose $6 to $105/bbl. However; since the initial open, both gold and oil have pared the majority of the move. Although, headline risk will persist as sentiment continues to change from headline to headline.

Gold Prices Lack Upside, Gold: While the precious metal saw a sizeable gap higher, the lack of follow through towards the prior highs of $1974 suggests that investors remain weary given last week’s sharp reversal. What’s more, it is worth noting that with sanctions on Russia making it difficult for the Russian Central Bank to use its FX reserves to provide stability to the Russian Ruble. However, while this will also relate to their gold; reserves, this will be harder to successfully sanction given that the majority of Russia’s gold reserves reside much closer to home. In turn, eyes will be on any additional announcements regarding gold reserves by the Russian Central Bank who earlier raised rates to 20% from 9.5%. Support resides at 1875-80, which marks last weeks low and the Nov 21 peak, where a close below opens the door towards 1850.

Oil: Much like gold, oil has also struggled to extend gains. A reminder that, a delegation teams Russia and Ukraine are currently in talks, where focus is on whether a breakthrough can be achieved to set up talks; at a higher level. Given that the backdrop remains extremely fluid, volatility will persist. On the topside; resistance sits at 105.80 with support at 96.50-75.

Gold Prices Moving to the Ebb and ...