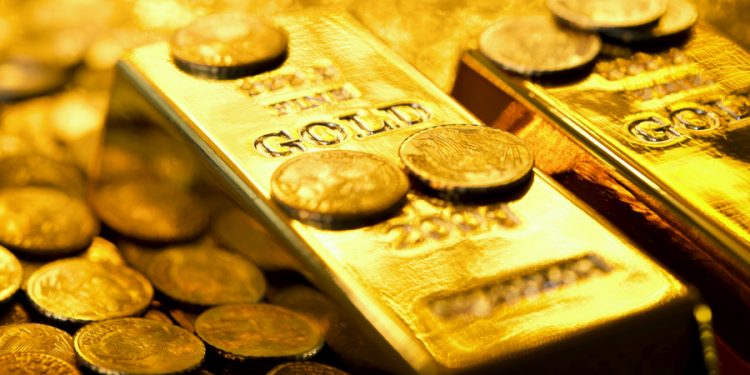 Gold Bounces Off $1,882, Gold prices closed at $1890.55 after hitting a high of $1925.00 and a low of $1884.40. GOLD broke its five-day bullish streak on Friday and turned red, dropping below the $1900 level. The precious metal market experienced a sudden decline after Russia invaded Ukraine. Gold dropped on Friday even though its rival currency, the US dollar, was also on the back foot. The US Dollar Index (DXY), which measures the greenback’s value against a basket of six major currencies, dropped to a 96.54 level. The market experienced the shocking news of Russia’s invasion of Ukraine and reacted in haste, which turned the market sentiment into risk-off.

Gold is considered a safe-haven metal, but it declined during Friday’s harsh geopolitical news. It’s possible that because precious metals had been gaining on the best invasion news and the market had already priced it in when the event occurred, traders began booking profits, causing a sudden drop in its prices. Furthermore, gold prices were also down because of the increasing inflation levels throughout the globe. Despite a great deal of uncertainty surrounding the Ukraine conflict, inflation fears kept the risk sentiment alive in the market.

On Friday, Federal Reserve Governor Christopher Waller expressed his thoughts on the debate about the pace of increasing interest rates to curb inflation. The governor said that interest rates should be increased to a full percentage by the middle of the year. He said it could be started with a half-percentage increase in March. However, he also maintained a condition that requires the incoming data to continue to point to an exceedingly hot economy.

At 18:30 GMT, the Core PCE Price Index remained flat with an expected 0.5%. Core Durable Goods Orders increased by 0.7% in January, exceeding the forecast 0.4% increase, bolstering the US dollar. The Durable Goods Orders also increased to 1.6% against the forecast 1.1% and supported the dollar. Personal income increased to 0.0% versus the expected -0.3%, bolstering the dollar. Personal spending also surpassed the expectations of 1.6% and came in at 2.1%, supporting the US dollar.

At 20:00 GMT, the Revised UoM Consumer Sentiment increased to 62.8, against the expected 61.7, and pushed the dollar higher. The Pending Home Sales dropped to-5.7% against the forecasted 1.5% and weighed on the dollar. The Revised UoM Inflation Expectations in February came in at 4.9%. Most data from the US side favored the dollar, which ultimately added further pressure on gold prices.

On Friday, the Federal Reserve Bank issued a new report, warning that price pressures could persist unless a shortage of available workers begins to ease. The central bank’s warning of wage pressures was backed by the data, which showed that inflation was still rising at a significant level. The report also said that the Russian military invasion of Ukraine could disrupt the economic outlook in unpredictable ways and could potentially undermine global economic growth and financial markets.

The comments from Christopher Waller and the Fed policy report could not turn around the negative momentum surrounding the US dollar and kept it under pressure. Instead, it capped further losses in gold prices. However, the yellow metal closed this week below the $1900 level.

Gold Bounces Off $1,882, In the last two days; XAU/USD has risen to a one-and-a-half-year high of $1,974.48 early Thursday, but has since fallen and has so far failed to cling to the $1900 level. It is worth noting that some investors are aware that the Russian Central Bank has some gold reserves and have booked profits ahead of the $2,000 mark; fearing that President Putin may use some of those reserves to support the Russian ruble.

Gold is trading with a bullish bias near $1,900 amid a surge in safe-haven appeal. The daily moving averages (DMAs) have a bullish slope and are located well below the XAU/USD; spot price. This, combined with the breach of a nine-month-old downslope resistance trendline, fueled the uptrend; allowing gold bulls to reclaim the $1900 mark. XAU/USD first resistance would be $1,916. Breaching the latter will expose the January 2021 highs of $1,959, which, if cleared, could pave the way to $2,000. Good luck!