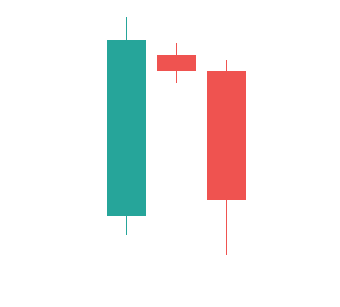 Among the many different types of technical analysis techniques available to traders, one of the more popular methods includes candlestick analysis. Candlestick patterns can be classified as continuation patterns or reversal patterns. In this lesson, we are going to examine a popular reversal candlestick formation known as the Evening star pattern.

The Evening star pattern is a candlestick formation that has three candles within it and is classified as a reversal pattern. The structure can be seen near the end of an uptrend, typically after a prolonged price move. The pattern has bearish implications, and traders would seek to position to the short side of the market upon confirmation of the pattern.

The Evening star pattern starts off with a strong bullish candle, followed by a central candle which is relatively smaller in size, and then the third candle will be a strong bearish candle which will close beyond the halfway point of the first candle. The bodies of the candles are most important within this formation, and the shadows or wicks within the formation are of less importance.

Looking at this from the price action standpoint, the initial bullish candle indicates strong upside momentum within the market, which is then followed by a period of neutrality as seen by the smaller body of the middle candle. This middle candle is often a Doji candle or a spinning top formation. However, there is no requirement for the middle candle to be either type.

Finally, a decisive price move occurs to the downside which reflects a noticeable shift in sentiment which is likely to lead to further price decreases. Sometimes, we will notice that the third and final candle within this formation opens as a gap-down price move. When this occurs, it is indicative of increased supply in the market further confirming a bearish stance.

The Evening star candlestick pattern can be seen quite frequently on the price charts; however, the best formations will generally be those that appear at the top of an uptrend. These would be considered the most reliable types of Evening star formations.

Now that we have laid out the structural elements within the Evening star candle formation, let’s not discuss some of the higher probability occurrences for the pattern. As we touched upon earlier, this formation can generally be seen after a prolonged price move higher within the context of an uptrend. However, it’s not always a good idea to fade the trend, particularly when there is strong persistent momentum behind the price move. One way to resolve this is by looking for the Evening star formation within an area of resistance.

The price chart above displays the daily price action for the Euro futures contract. Notice that starting at the bottom left, you can see the prices were moving higher, and where the majority of the candles can be seen as green bullish candles. As such, there is no denying that this market was trending higher.

Sometime later, we can see a major engulfing pattern that thwarts the upward price move, causing prices to back off and retrace lower. From here, prices consolidate and move in a sideways manner. A clear swing high resistance level can be recognized at this point. This resistance level has been marked near the top of the price chart by the red horizontal line.

Notice later as prices move higher towards this resistance level, that an Evening star pattern completes. The completed pattern can be seen within the yellow circled area. Immediately following the completion of the Evening star setup, prices began to trade lower quite sharply. This example illustrates the power of combining traditional price action with candlestick pattern analysis.

Let’s look at another practical application of the Evening star candlestick reversal pattern. This time, we will combine it with the popular Relative strength index indicator. The RSI indicator is a momentum indicator that is quite useful in gauging the extent of a price move. More specifically, it can tell us whether a market is overstretched and has become oversold in case of a bearish price move, or one that has become overbought in case of a bullish price move.

Let’s refer to the price chart of Gold and take a look at the Evening star chart pattern with the RSI indicator in action.

Notice that during the entire price sequence higher, the RSI indicator was rising. This is indicative of a healthy bullish price trend. But towards the peak, we can see that an Evening star reversal pattern formed on the price chart. This can be seen within the yellow circled area. Just as this reversal candlestick pattern was completed, we can take note of the RSI reading.

Notice that around the same time that the Evening star pattern was nearing its completion, the RSI reading had emerged into overbought territory, exceeding the upper threshold of 70. This would have provided an excellent opportunity to short the market immediately following the completion of the Evening star formation. Even though prices consolidated a bit after the pattern completion, the price ultimately moved lower as we would have anticipated. Learn What Works and What Doesn’t In the Forex Markets….Join My Free Newsletter Packed with Actionable Tips and Strategies To Get Your Trading Profitable.

Let’s now move on and see how we might go about building a complete trading strategy that includes the Evening star trading pattern. The strategy that we will describe is a simple yet effective method for trading the Evening star signal. The strategy works on all time frames across most liquid instruments. But it should be noted that the higher time frames such as the eight-hour, daily, and weekly tend to perform the best. Additionally, markets that are displaying mean reversion characteristics tend to outperform as well using this methodology.

The strategy incorporates three simple technical elements. First, we will need to confirm the presence of an Evening star pattern on the chart. Secondly, we will be looking for the Evening star formation to occur at or near a resistance level. And finally, will be utilizing the 50 days simple moving average within the strategy.

Since the Evening star pattern is a bearish reversal pattern, we will only be taking short trades with the strategy. So here are the rules.

As you can see the rules for this Evening star trading system are quite simple. But do not let the simplicity of this system fool you. It is an effective robust trading strategy that works very well given the right market conditions.

Let’s now illustrate our previously outlined Evening star trading strategy in action. Below you will find the price chart for the British Pound to US Dollar Forex pair based on the daily timeframe.

As we can see from the far left corner of the chart, the price began trading sideways creating a W shape formation. We can see that there are three clear peaks within the price action. If we draw the best fit line among these three price peaks, we can plot a key resistance level. This resistance level will be something that we will watch closely as price returns to it at some point in the future.

Following the W shape formation, prices began to move lower sharply and eventually stalled as a bullish pin bar formed near the bottom of the price action. The bullish pin bar was followed by a strong price move higher and a bullish Marubozu candle breaks through the 50 period SMA to the upside.

Prices then begin to consolidate a bit and then after a few tests of the 50 SMA support line, prices move higher once again. This time we can see that the price approaches the resistance level and then backs off a bit. A subsequent push higher breaches the resistance level, but then the price gets rejected to the downside. If you look closely at the price action here, you can see that an Evening star candle formation has been completed.

You can see the maroon brackets noted as 1X and 2X, which represent a price move of one times the size of the formation, and two times the size of the formation, respectively. Our target, based on the strategy rules would be set at the 2X level. The green horizontal line marks the level at which we would have exited this position with a handsome profit.

Let’s look at another example of this Evening star trading method. This time we will be using the daily chart for the EURUSD currency pair. You’ll find this chart below.

Here, we can see that the price started lower and began to steadily move higher. Notice the number of strong green candles representing upward price closes, in comparison to the number of red candles representing downward price closes. There is no mistaking that the overall trend within this market was bullish. After a brief consolidation within the EURUSD pair, the prices continued higher until we see a bearish pin bar formation, also referred to as a shooting star pattern.

This is another significant candlestick pattern that has bearish implications. The price move lower following the shooting star formation would warrant us to view the high of that candle as a significant area of supply, and thus we would mark a resistance level there.

Now, after a handful of candles following the shooting star pattern which pushed the prices lower, the market once again begins to gain upward momentum. As a price moves into the resistance level, the market forms another bearish reversal candlestick pattern. This time it’s an Evening star.

And so, once we recognize the completed Evening star forex pattern we could prepare for a short trade in this market. But before we do, we would want to confirm that the price is trading above the 50 SMA at the completion of the Evening star formation. A quick glance of the chart confirms this condition and thus we would have the go-ahead to place a sell entry order at the start of the following candle.

You can see the entry-level market and the stop-loss placement just above the high of the Evening star structure. Our exit strategy calls for setting a target at the level where the price reaches two times the length of the entire Evening star structure. You can reference the lowermost maroon bracket which represents our intended target level and exit point. Once again, this Evening star reversal strategy provided for a profitable trade. Download the short printable PDF version summarizing the key points of this lesson.