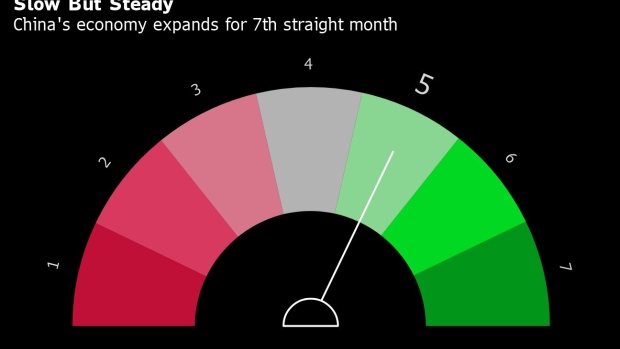 China’s Stable Economy: China’s economy expanded at a moderate pace in the final month of the year, supported by better business sentiment, easing factory inflation pressures, and faster car sales. However, the slumping property sector and slowing external demand are clouding the outlook for the world’s second-largest economy.

That’s the outlook from Bloomberg’s aggregate index of eight early indicators for this month. The overall number stayed unchanged in December, indicating the economy is still improving at a stable pace, but there are mixed signals from some of the real-time economic data.

Export strength likely continued in December, with South Korean exports — a bellwether for global trade — expected to record a double-digit gain. However, the pace may slow from November due to shipping bottlenecks, and the outlook for 2022 is less clear as it will be harder to sustain the record-breaking expansion of this year.

“The pressure on stabilizing foreign trade in 2022 is not small,” China’s Commerce Minister Wang Wentao said in an interview with state-run Xinhua News Agency published Monday. China’s trade will face a number of risks and challenges, including slowing external demand, rising raw-material prices, and high freight and labor costs, he said.

The performance of export-oriented small businesses improved further during the month due to robust export orders, according to a survey of more than 500 firms by Standard Chartered Plc. But the companies are uncertain about the outlook for sales and production in the next three months, Ding Shuang, Standard Chartered’s chief economist for Greater China and North Asia, wrote in a report accompanying the survey.

External demand normalized and domestic demand improved, according to the report, with new orders accelerating and finished goods inventory falling.

Home sales in China’s four tier-one cities continued to fall in December, even as authorities try to prevent a hard landing of the sector. Small real-estate firms were hit hard by the regulatory crackdown, the survey showed, with the sub-index for real-estate SMEs plunging to 48.6 from 57.6 in November.

Factory-gate inflation showed some signs of easing this month, with a set of data tracked by Bloomberg Economics slowing from a peak after speeding up for three straight months.

In what is usually an indicator of strong construction demand, steel rebar inventory dropped. The construction sub-index of the Standard Chartered survey also rose higher, possibly reflecting an acceleration of local government spending despite the cold weather.

However, construction demand has been weak recently due to the housing market issues and slow spending on infrastructure, and a campaign to cut steel output could also be a factor in the shrinking stocks of rebar. Although some analysts expect steel output to rise marginally in December, the government’s desire to curb pollution during the upcoming Winter Olympics will put a cap on any increase.

Bloomberg Economics generates the overall activity reading by aggregating a three-month weighted average of the monthly changes of eight indicators, which are based on business surveys or market prices.

Selling the Retrace in NZD/USD at Resistance