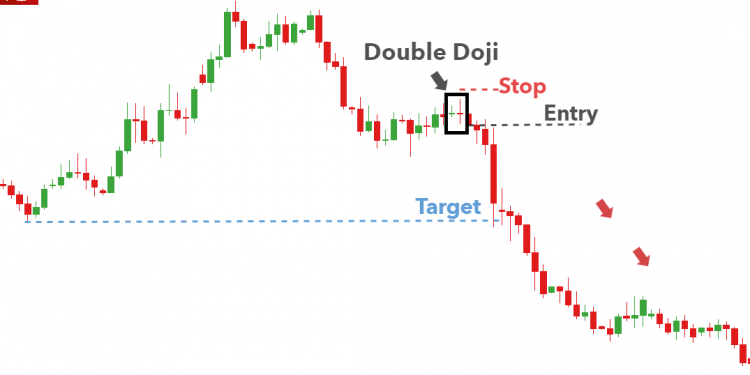 Double Doji Trading Strategy; As we’ve noted earlier, the Doji pattern is one that is characteristic of indecision in the market. As such, most Doji patterns by themselves are not very telling. However, when the market you are trading forms multiple Dojis in consecutive fashion; this can be an extremely opportune time to take advantage of a breakout trade.

With this backdrop, we will create a strategy for trading the Doji pattern that will take advantage of these periods in the market. Our strategy is based on a double Doji pattern; which is essentially any two consecutive Dojis appearing on the price chart. They should preferably be of a similar Doji variation; however, this is not a requirement. This double Doji system is a very simple price action-based strategy that requires nothing more than the presence of two consecutive Doji patterns.

what is Double Doji?

So here are the rules for trading the Double Doji set up:

Let’s now shift our attention to highlighting some actual examples of the Doji pattern set up on a few price charts. We’ll look at a few Double Doji patterns in the Forex market.

We will now draw the support and resistance lines for the double Doji pattern. Notice the second candle within this double Doji pattern put in high of the entire pattern; and also the low of the entire pattern. As such, we will plot our support line at the low of this candle; and the resistance line at the high of the candle creating our breakout levels.

Now that our breakout levels have been plotted; we will place an OCO order; one cancels the other order; with a buy stop, one pip above the high, and a sell stops one pip below the low of the support line. Once we’ve done this, we’ll wait to see which way the price action breaks out.

We will be using a two-tiered target as an exit strategy which calls for the first exit to be taken upon price reaching an equivalent distance of the double Doji pattern. Notice the second orange bracket which represents Exit 1. Price easily reach this level and continued to move higher. Exit 2 can be seen just above Exit 1 and represents a length of twice the double Doji pattern. Here again, the price reach that level quite quickly after Exit 1 was achieved taking us out of the position entirely with a great result.

Let’s now look at another example of this strategy in action. This time will be referring to the price chart for the US Dollar to Canadian Dollar Forex pair as seen on the daily timeframe.

Now we will go ahead and place our OCO order, one cancels the other, one PIP above the high as represented by the upper black dashed line. tone PIP below the low as represented by the lower black dashed line. Once we’ve done that we would go ahead and wait until the price either breaks above the resistance level or below the support level to enter into the position.

In this case, the price immediately breaks lower on the very next candle following the double Doji formation. You can see that sell entry is noted on the price chart. Now that we are in this position, we will make sure to protect ourselves in case of an adverse price move by placing a stop-loss order in the market. Based on our strategy rules, the stop will be placed just above the high of the double Doji formation.

Our two-tiered exit strategy calls for placing a target at a length that is equivalent to the double Doji pattern projected lower from the breakout point. This will serve as our target for Exit 1. Notice how two candles following the breakout Exit 1 was reached providing us some profits on this trade. However, soon after Exit 1 was reached prices traded slightly lower, and then began to reverse to the upside.

As a result, our target 2 was never reached on this trade. Remember target 2 is set at a level that is equivalent to twice the length of the double Doji pattern. Instead, as the price reversed and move higher, our stop loss was eventually triggered, taking us out of the position. In this trade, we wound up with a breakeven situation. because we were able to reach Exit 1, however, we gave back those profits when our stop loss was hit.

Beginning traders and students of the market should take some time to practice recognizing this important pattern as it is commonly seen within the price chart. Knowing when and where the Doji pattern occurs can give traders some insights into what is occurring behind the scenes in the market.