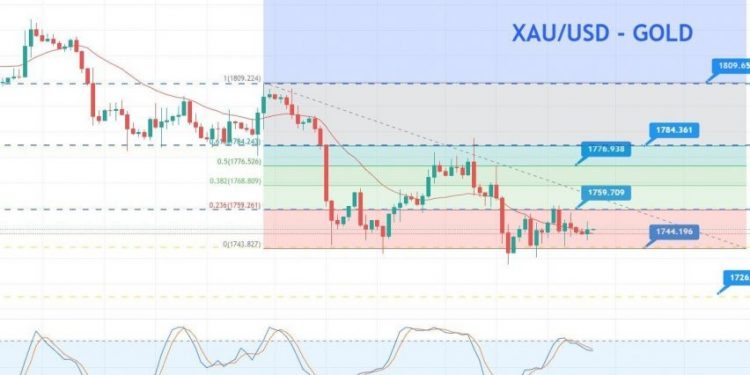 Gold Standstill: GOLD closed at $1,751.15, after reaching a high of $1,760.85, and a low of $1,744.70. The precious metal tried; to move higher during the early trading hours on Monday; but lost most of its daily gains during the late trading hours. However, gold prices managed to remain green for the second consecutive session, nevertheless. Gold prices rose on Monday, but the gains were short-lived, due to a stronger US dollar and an increase in US Treasury Yields.

The precious metal was also under pressure throughout the trading session as investors awaited speeches from the Federal Reserve policymakers for more clues on the tapering strategy. On Monday; Chicago Fed President Charles Evans said that the US economy would soon meet the Federal Reserve’s bar for beginning to reduce its bond purchase program. However, he said that a hike in the interest rate would only be warranted in late 2023. He also said that the economy was very close to meeting the substantial further progress standard that the Fed had laid out in December.

He continued that if the improvement in the employment situation continues, those conditions will be met soon, and tapering will begin.XAU/USDNew York Federal Reserve President John Williams also backed Evans’ comments, saying that the central bank might start reducing the pace of its asset purchases soon if the economy continues to improve as expected. He acknowledged that the substantial standard of further progress was being met, in terms of the goals set by the Fed relating to inflation and employment. Williams predicted that the economy would grow between 5.5% and 6% this year, with inflation returning to 2% the following year. Furthermore; Fed Governor Lael Brainard also said on Monday that US employment was a bit short of the mark, and it was likely that it would remain the same, due to the resurgence of the pandemic. However; she was hopeful that if hiring continued, the threshold set for tapering by the Fed would soon be met, and that it would pave the way for scaling back $120 billion in monthly asset purchases.

All of these comments were consistent with Jerome Powell’s remarks last week. This provided additional support to the US dollar and pushed the US Treasury Yields higher. The US Dollar Index, which measures the value of the greenback against a basket of six major currencies, reached 93.49, and on the benchmark 10-year note, the US Treasury Yields increased to 1.51%; which was the highest level in three months. This added further strength to the greenback.

On the data front, at 17:30 GMT, the Core Durable Goods Orders for August came in, showing a decline to 0.2%, against the forecast of 0.5%, weighing on the US dollar and adding to the gains in the yellow metal. The Durable Goods Orders surged to 1.8% in August, against the projected 0.7%; supporting the US dollar; and dragging the gold prices down.

Gold is trading with a neutral bias at the 1,753 level and facing immediate resistance at 1,758. An intraday pivot point level is extending immediate support at 1752.23. On the 4-hourly timeframe; the precious metal is tossing above and below the pivot point level; as investors don’t have any solid fundamentals to drive one-sided movement.

Furthermore, the 50-day SMA (simple moving average) at 1,750 suggests a gold trend. However; the series of Doji candles between 1,759 and 1,744 marks a neutral bias. Thus; we should wait for a breakout of this range, in order to determine further trends in GOLD.