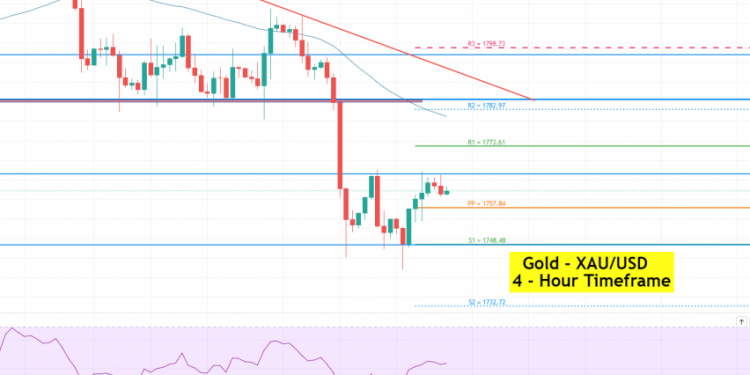 Gold’s Choppy, During Tuesday’s Asian trading session, the yellow metal extended its previous three-day downward rally, drawing some further offers around the $1,760 level, as a result of the fact that Chinese traders were absent for another day, and the lack of fresh fears, both of which tend to have a positive impact on the market trading sentiment and contribute to losses in the safe-haven GOLD.

It is worth recalling that the safe-haven metal dropped to the lowest level since August 11 yesterday, before bouncing off $1,742. The corrective pullback gained additional back-up from the cautious optimism in the market of late. Apart from this, another reason for the losses could also be attributed to US President Joe Biden’s latest push for partnership with the United Nations (UN), in the hopes of solving key problems, coupled with US House Speaker Nancy Pelosi’s hopes for a $3.5 stimulus package, which had a positive impact on the market trading sentiment.

The upbeat environment surrounding the market trading sentiment tends to undermine safe-haven assets, including gold. The weakness of the broad-based US dollar, triggered by multiple factors, also helped to limit the losses in the yellow metal prices, as weaker dollar valuations make gold cheap for investors who hold other currencies. Currently, gold is trading at 1,761.47, and consolidating in the range between 1,761.14 and 1,766.16.

Despite the anxiety on the market ahead of the US Federal Reserve’s policy decision and the Chinese Evergrande Group’s ongoing debt crisis, the market trading sentiment maintained its positive moves of early in the day, and remained well bid ahead of the European session. However; this could be as a result of the latest comments coming from the United Nations meeting this week, which indicated that the global leaders would reach consensus on the climate change agreement and overcome fears arising from Iran having no schedule for direct talks. In the meantime, US President Joe Biden’s latest push for partnership with the United Nations (UN); in an effort to solve significant problems; and US House Speaker Nancy Pelosi’s renewed hopes for a $3.5 stimulus bill, added further optimism to the market trading sentiment.

As a result, the S & P 500 futures gained 0.30% intraday; bouncing off a two-month low. Meanwhile the US 10-year Treasury yields are consolidating; with the latest losses at around 1.31% at the time of going to press. The upbeat tone in global equity markets weakened the prices of the safe-haven metal; GOLD.

Gold’s Choppy, On Tuesday, gold is trading at the 1,762 level and gaining immediate support at the 1,757 level. An intraday pivot point is extending this particular support level, and below this; gold has the potential to go after the next support level of 1,748.

At the same time, the precious metal is gaining significant support at 1,745, which is being extended by a double bottom pattern. On the 4-hour timeframe, immediate resistance for the precious metal remains at 1,765; and a bullish crossover at this level could extend the buying trend until 1,773 and 1,782. The 50 SMA and the RSI support a bearish trend; thus; a bearish bias dominates below 1,773 today. Good luck!