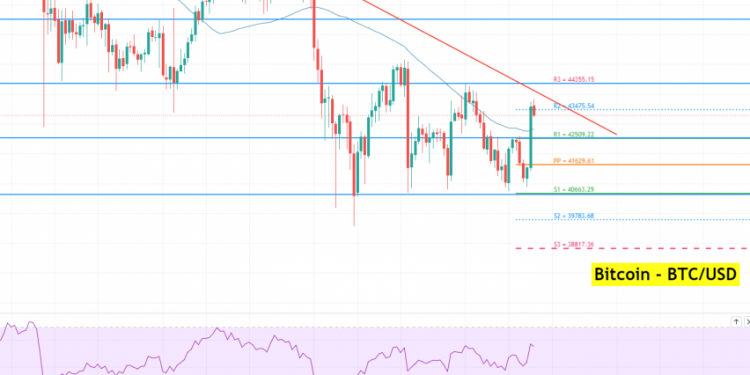 Bitcoin Soars +4.37%; The [[BTC/USD] closed at $41,551.0, after posting a high of $42,591.0, and a low of $40,811.0. Owing to various positive sentiments in the cryptocurrency market; BTC/USD rose on Wednesday; after falling for two days in a row. An online lender, Affirm, has recently announced that crypto investments will soon be available to customers with savings accounts. The company’s CEO, Max Levchin; has said that his company is working on a feature that will allow consumers to buy and sell cryptocurrencies directly through their savings accounts.

Although the timeline for the release of this feature has not been disclosed, the idea itself is enough of an encouragement for investors. and this resulted in an improvement in the whole market mood. As a result, the leading cryptocurrency, Bitcoin, also surged, posting gains for the day. Furthermore, a former lead developer for the Bitcoin network, Gavin Andresen. has come up with an epic prediction in which he suggests that Bitcoin could either rise to $6 million per coin or crash to zero. He acknowledged that his prediction was a little piece of science fiction but was certainly very possible. He went on to say that transaction fees could reach $7,500 by then, and that the majority of them would not take place on the network itself.

Meanwhile, the President of El Salvador, Nayib Bukele, has posted a video showing what could be the world’s first public Bitcoin mining facility powered by electricity acquired from volcanoes. He showed the installation of several Bitcoin mining machines in a geothermal electricity generation plant. This news also added some strength to the BTC/USD, pushing its prices higher. Furthermore, a Bloomberg strategist, Mike McGlone, has said that there is a huge possibility that the US will follow Canada in respect of the future-based BTC ETF. Currently, over 30 applications have been filed with the SEC, and the fact that the money is migrating from the US to Canada is putting pressure on the US regulators to approve Bitcoin futures. He also said that he sees Bitcoin moving up to $100K in October, which also added strength to the rising prices of BTC/USD on Wednesday.

On the support side, the 43,258 level is providing immediate support. and a break below this level would open the pair to the 42,530 level. The BTC/USD pair has broken the symmetrical triangle pattern that is keeping the pair at the 42,550 level on the 4-hour chart. Over 42,530; the bullish bias reigns supreme, and vice versa. Good luck!