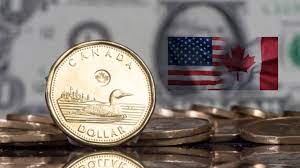 Canadian Dollar BoC Decision: USD/CAD opened lower this morning after falling U.S. Treasury yields (reduced outlook on U.S. inflation) led to a weaker dollar. Yesterday’s Bank of Canada (BoC) 50bps rate hike sparked a CAD rally clawing back recent lost gains however, long-term I do favor the dollar as I don’t think the Canadian economy can keep up with the Fed’s aggressive outlook. This should see the dollar bid against the loonie as we move further into the rightening cycle.

Crude oil prices remain elevated but the influence on USD/CAD has diminished as the U.S. is currently a net producer of crude oil. This is evident in USD/CAD price action whereby CAD is relatively muted compared to previous crude oil price surges.

Later today we have a few option expiries (see details below) for the New York cut. Generally speaking, prices tend to approach the strike price on large expiries as the cut looms. Currently USD/CAD is slightly higher than the below strikes which could see a move lower later on the day.

As we head into the Easter weekend, U.S. retail sales and consumer sentiment will close out the week while next week’s Canadian inflation will dominate headlines.

USD/CAD looks to be heading towards a re-test of the 1.2500 psychological support one within wat looks to be a forming bear flag. Short-term this bearish outlook is very likely but as mentioned prior, USD upside is my preferred approach beyond Q2.

IGCS shows retail traders are currently prominently LONG on USD/CAD, with 62% of traders currently holding long positions (as of this writing). At DailyFX we typically take a contrarian view to crowd sentiment but after recent changes in longs and shorts, sentiment reveals a watchful bias.