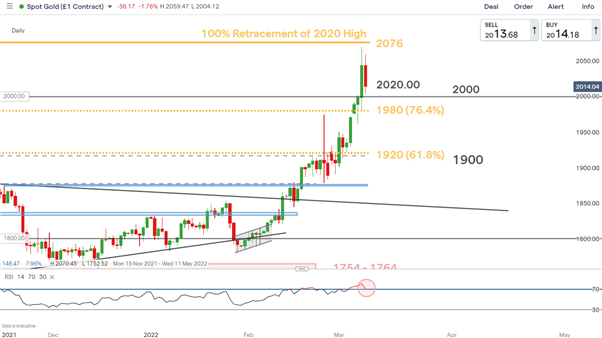 GOLD (XAU/USD) NEWS, Determinants of gold’s price are pulling in different directions – what this means for gold Pullback in gold has some room to move but a bullish continuation remains central to the current landscape in the absence of a diplomatic solution to the Ukraine crisis

DETERMINANTS OF GOLD’S PRICE ARE PULLING IN DIFFERENT DIRECTIONS

The gold price is determined by a number of different factors; which now seem to be diverging as equity markets and other risky assets appear to have found their feet.

Typically, the following are some examples of factors that either boost or weigh on the gold price:

Markets anticipate 6 rate hikes from the Fed this year; with the first all but certainly arriving next week on March the 16th however this has done little to weigh on gold prices as inflation heats up.

The chart below is the Federal Reserve’s longer term inflation gauge which reached a high of 2.90 recently.

In addition, gold has received a major boost largely due to its safe haven appeal as Russia continues to invade Ukraine. Therefore, fundamentally; there is a lot of support for gold prices in the short to medium term.

In a similar move, the U.S. dollar has strengthened significantly since the invasion also due to its safe-haven appeal and liquidity profile. Then, taking into account that gold is priced in dollars, this effect tends to limit gold prices often resulting in a decline in the precious metal’s value. However, gold and the US dollar have risen in tandem lately.RECOMMENDED BY RICHARD SNOWHow to Trade GoldGet My Guide

Risky assets like US and EU equities and risk associated currency pairs like the AUD and GBP have all seen a sizeable lift today as risk sentiment appears to have eased overnight on news that Ukraine is no longer pressing for Nato inclusion and is open to a “compromise” regarding the status of the two breakaway pro-Russian regions.

Markets viewed this as a glimmer of progress alongside agreed ceasefire corridors allowing Ukrainians to flee conflict areas. Spot gold has pulled back significantly from the prior high as the market was trading in overbought territory for some time (daily chart).

The level of support at 2020 has already been surpassed with the psychological level of 2000 the next level of support. Further declines could see a move towards the 1980 level. However, the invasion of Ukraine continues in the absence of any diplomatic solution and therefore gold remains highly volatile and susceptible to a bullish continuation should risk sentiment sour again.

The daily chart shows gold’s parabolic rise and now emphasizes; the strength of the pullback. The market was so heavily oversold that; it is yet to trade below such elevated levels, meaning the pullback has room to continue before bulls attempt to reignite the bullish trend.

EUR/USD Forecast: Euro Reprieve Could be the ...