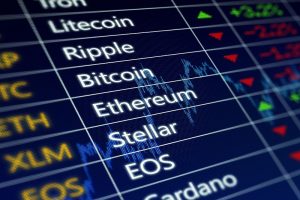 Terra LUNA Keeps, Cryptocurrencies are finding it hard to turn bullish, except for the Terra LUNA coin which has been showing incredible resilience in recent months, despite the crypto market being on a strong bearish trend. The decline seems to have ended now as most crypto coins have been trading in a range for the last few weeks or so, but the bearish momentum remains, as the risk sentiment remains subdued due to geopolitical tensions.

Bitcoin declined for three months, from November to January, as the crackdown on cryptocurrencies continued and the sentiment turned bearish. Although, after closing in red during that period, last month closed in green, but this month has been negative again so far, as the tensions in Ukraine keep weighing on risk sentiment in financial markets.

Buyers have tried twice to reverse the bearish momentum, but they have failed at the $45,000 level, which has turned into a decent resistance zone. Bitcoin should have benefited from the conflict in Ukraine and the sanctions on Russia, since it would spur more BTC buying and trading. In fact, after the dive in the Rubble, trading volumes between the Russian Ruble and Bitcoin increased to a nine-month high. But, BTC/USD can’t keep up the gains and it has fallen below $40,000 again, but at least it is making higher lows which is a positive sign.

Terra LUNA Keeps, LUNA coin has been the most bullish cryptocurrency among the 20-30 top ones; it kept making new highs until the end of December even though the crypto market had been on a bearish trend for two months. It did retreat lower in January, but the 200 daily SMA (purple) held as support and LUNA/USD headed for the highs again late last month.

In the last several days, we have seen a retreat but that is much smaller than in many other crypto coins, so LUNA should retest the highs again soon, once the sentiment in the market improves, since Terra LUNA has become the second network by staked value at $40 billion; surpassing Ethereum with $28 billion. So; Terra keeps progressing in the DeFi space which is helping the price of LUNA coins and the burning of LUNA tokens is helping too. Recently Terra burned around $2.5 billion worth of LUNA tokens.